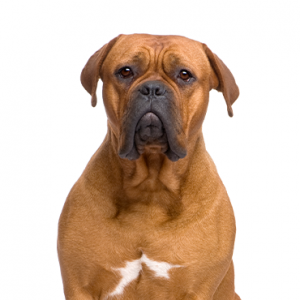 The Dogue de Bordeaux is a large French mastiff also known by other names such as Bordeaux Mastiff, French mastiff or Bordeaux dog. It is a really powerful dog with a muscular body and has its origin from France. This breed has a large head hence; a caesarian operation is sometimes required during its birth. Discover more about our Dogue De Bordeaux puppies for sale below!

The Dogue de Bordeaux originated from France as far back as the fourteenth century around Bordeaux, a southern region in France. Its name was derived from the city’s name. At some point in time, the Dogue de Bordeaux was known to come in two varieties; the Dogues and Doguins with former being larger than the latter.

The Dogue de Bordeaux is a sweet and even-tempered dog with natural intuition to protect its owner. It possesses a dual personality; on one hand, it is gentle while on the other, aggressive. It doesn’t get angry easily and as a result; it takes a whole lot to make this cool-headed breed lose its cool. While this breed can be stubborn and arrogant, it rarely forgets a command once learned.

This breed does better in a large yard and is not apartment friendly. It requires lots of room to move freely around. The Dogue de Bordeaux thrives well in a home that can provide love and affection.

The exercise need of this breed is on a really low level but if care is not taken, it can become obese over time due to inactivity. It is therefore advisable to exercise it daily even if all it takes is a stroll in the park.

When fully grown, the Dogue de Bordeaux requires moderate exercise but as for the puppies, no more than ten minutes of exercise at a time is required.

The Dogue de Bordeaux possesses short, fine and silky coat that does not shed and as a result, weekly brushing is required in order to keep it healthy.

It is also important to check its face regularly in order to ensure it is clean and void of infection. Ears also need to be checked weekly and bathing is required occasionally.

The Dogue de Bordeaux is also a heavy drooler and as a result, requires constant wiping off saliva from its mouth.

The unregulated breeders who are selling outside of the USDA regulations and without a license are what we consider to be “Puppy Mills.” We are committed to offering Dogue de Bordeaux puppies who will grow up to become important members of your family. We only purchase puppies from the very best sources, and we stand behind every puppy we sell.

Ideally, the male Dogue de Bordeaux should weigh between 54 to 65kg, same goes for the female.

This differs with dogs, some love to get wet while some do not. Some Dogue de Bordeaux really love water and swimming is easy on their joints. If you desire to hit the pool with your Dogue de Bordeaux, then it is advisable to introduce it to the water at an early age. However, do not force your puppy into the water if it’s not ready to do so.

The average lifespan of the Dogue de Bordeaux is between 5 to 8 years.

The Dogue de Bordeaux’ limited gene pool makes it susceptible to extreme temperature and other heart diseases such as aortic stenosis, ectropion, dilated cardiomyopathy amongst others.

Both male and female Dogue de Bordeaux have pros and cons. In order to determine what gender to go for, it is advisable to weigh both options fully before making a decision.

Being neutered keeps your Dogue de Bordeaux at its best behavior, happy and also healthy. It also reduces its risk of breast cancer and overall, improves the quality of your dog’s life.

The neutering procedure for Dogue de Bordeaux is not painful and is usually carried out under general anesthetic hence; the dog won’t feel a thing during the entire process.

Are you interested in purchasing a Dogue de Bordeaux?