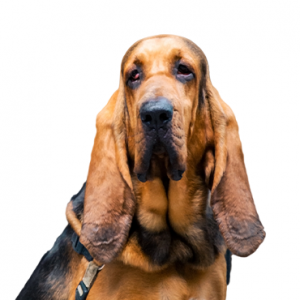 The bloodhound is an amazing breed of the canine family. It is a very kind and friendly pet who would do anything for its owner. It is also very loyal and can stick to you no matter what. It is the definition of a man’s best friend and the kind of pet you want in your home. Discover more about our Bloodhound puppies for sale below!

Though the bloodhound is a breed of canines that hunts from just scent, it’s name is definitely not evidence of its taste for blood. The bloodhound is typically a royal dog, its name speaks of the fact that it is blooded.

It was used to track and hunt thieves as far back as the 16th century and this is still happening now. When its reputation diminished as a result of the Civil War, some Americans took it upon themselves to breed them again and this produced dogs you would love to keep as pets.

It is mostly used by law enforcement for manhunt, searches, and rescue operations. It is a unique breed and is ranked 45th on a list of 155 breeds in the American Kennel Club.

Some behaviors of the bloodhound could be contradictory and you’d need an enormous amount of patience to figure them out. They could be very affectionate but also shy especially around people they are not accustomed to.

They are intelligent enough to be trained and could be sensitive to corrections but they still would want to do things in their own way. When they are excited, they could get very vocal and do a lot of barking however some others are just quiet and very peaceful.

Social structures affect their temperaments greatly. When they’re young, you would do your bloodhound a world of good to expose them to people, sights, and places so they get accustomed to all of these.

This dog breed is in love with children. They are generally very excited when they get to play with children and this should be encouraged. You know they are really big dogs so be sure to supervise any contact with babies. Older children shouldn’t have any issues playing with a bloodhound.

You should also have a yard where they could play because they tend to become lonely if left unattended. They do well with other dogs and even cats.

A big dog such as a bloodhound needs all the exercise it can get. Typically, they love to run for miles following a trail and you’d need to keep that up. They are great running buddies and if you live in the country, they may just be the perfect pet for you.

However, you should be sure not to over-exercise them. The underlying rule is to add 5 minutes to their exercise time per growth month. So, if they’re 3 months they should do 15 minutes, 4 months should do 20 minutes. Be sure to understand how they react or behave when they’re tired.

Grooming a bloodhound would include bathing and brushing his coat on a regular basis. The most tasking part about grooming is the care for its ears. They are prone to ear infections and you would need to clean their ears on a regular basis to avoid this.

If you don’t have the time, make regular appointments with a Groomer. You should also clean its wrinkles daily and its flaws after every meal to take out any food that may be trapped in there. Oh, and don’t forget to brush its teeth regularly to avoid bad breath and gum decay. Cut its nails and keep them clean too.

The unregulated breeders who are selling outside of the USDA regulations and without a license are what we consider to be “Puppy Mills.” We are committed to offering Bloodhound puppies who will grow up to become important members of your family. We only purchase puppies from the very best sources, and we stand behind every puppy we sell.

Owing to the fact that this dog breed is a hunting kind, they do need lots of exercises. If you take them on a run, chances are that they would outrun you so just stick to long walks.

The answer is no. If you let them sit outside or worse leave them outside through the night, they might howl till the next morning and this may be uncomfortable for your neighbors. They love companionship and having people or fellow dogs around them.

The average life expectancy of a bloodhound is about 10 to 12 years.

The bloodhound has the following problems; it is susceptible to elbow dysplasia and this could lead to lameness, it could also have skin fold dermatitis, ectropion, entropion, canine hip dysplasia. Regular checks with the vet doctor could resolve some of these issues early enough.

Yes, they do, especially in the fall and spring. You could take out the excess hair using a shedding blade.

Bloodhounds are a scent hunting breed that isn’t so easy to train. You would require lots of patience with them.

Not towards humans but they still have the hunting instinct to go after little animals and creatures.

This is probably for its own safety as they are known to take off at the slightest scent. If trained right, you could unleash him.

Not necessarily. They are not mean or harsh towards humans.

Undoubtedly. If they cannot find their owners, they have been known to stop eating.

A bloodhound may just be the companion you have been searching for given its loyalty and affectionate features.