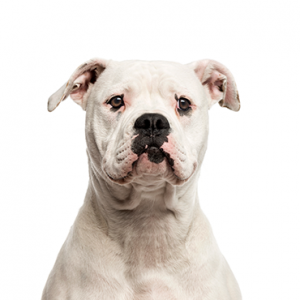 A huge part of the American culture, the American bulldog is one of the most loved and sought-after dog breeds in the United States and the world at large. Due to their obvious strength and agility, they are often viewed as a kind of cultural icon in America.  Discover more about our American Bulldog puppies for sale below!

In the past, the English bulldog was used by foreign immigrants who moved to South America and brought their dogs with them. They weren’t considered “breeds” but were more of a generic bulldog and were originally used as guard dogs for farmlands, stock, etc.

The breed, however, became close to extinction after the second world war. Some breeders, John D. Johnson, and Alan Scott kept infusing several bulldogs together in the bid to breed the American Bulldog while monitoring its health and capabilities.

Today, the American bulldog is completely rid of the fear of being extinct and has become one of the most popular dog breeds in the country.

The American bulldog is many sizes larger than the English Bulldog; however, they are quite similar when it comes to their temperament. It is basically a huge, cuddly, lap dog that loves children and is very affectionate. It is brave, confident and extremely loyal to its owners.

They can be quite reserved when around strangers as they like to mark their territories. When trained from a young age, the American Bulldog will display an impressive level of intelligence. They are not so friendly with other strange dogs and mostly like to keep to themselves.

As earlier stated, the American bulldog is a fun-loving, happy dog that thrives in a family setting. The perfect environment for this breed would be a home with a large backyard that is well fenced-in. Since they are very energetic and must be kept active, it is imperative to their growth that they have ample space to run around during the day.

This is crucial for their mental and physical well-being. For dog lovers who live in apartments, the American bulldog might not be the best option for them. This is because there is inadequate space for them and being left alone would adversely affect their mental health. They can also become very irritable and destructive if left alone for long periods as they need constant mental and physical stimulation.

The American Bulldog needs about two hours of outdoor exercise on a daily basis. It goes without saying that this breed is not suitable for people who work many hours every day. This dog breed requires basic physical and mental stimulation like jogging, walking, chasing balls, playing fetch, farm work, agility, and basic obedience exercises.

Due to the temperament of the American Bulldog, it has to get as much exercise preferably in the outdoors. If its exercise requirements are not consistently met, this dog breed will take out its frustration in your home by chewing apart and basically destroying everything it comes in contact with while running around.

The American Bulldog has quite a short coat with a minimized length and this feature makes it easy to groom. Brushing their coats weekly is usually enough when it comes to grooming the American Bulldog as they do not shed a lot. They also need thorough baths weekly or as needed as this will keep the shedding in check.

The unregulated breeders who are selling outside of the USDA regulations and without a license are what we consider to be “Puppy Mills.” We are committed to offering  American Bulldog puppies who will grow up to become important members of your family. We only purchase puppies from the very best sources, and we stand behind every puppy we sell.

American Bulldogs love routine and will adapt to an exercise and grooming routine if the owner enforces it perfectly. As loyal dogs, they love to please their owners but will only obey upon frequent reinforcements.

This is mainly due to genetics and is not a cause for concern.

Yes! Many vets advise that American Bulldog owners should ensure their pets are neutered or spayed when it is between four and nine months.

The American bulldog has a very large appetite in its formative years. They must, therefore, be fed very often (about four times daily) and in double portions when they are puppies right until they turn four.

Yes! The American bulldog will fit right into your family. They love kids and tend to gravitate towards them. However, it is important that your kid knows how to act properly around dogs to ensure they don’t get hurt.

A lot of the health problems experienced by American bulldogs are mostly genetic and do not affect the entire breed. These ailments could range from the kidney to thyroid disorders and a lot more.

The American bulldog has an average lifespan ranging from ten to fifteen years.

The average American Bulldog can grow to 58kg for males and 41kg for females. However, it is important that their diets are closely monitored to keep them from getting overweight.

The male American bulldog can grow as tall as 71cm while its female counterpart can grow up to 61cm.  If you want a loyal, smart and incredibly active dog, then the American Bulldog is the perfect fit for you.