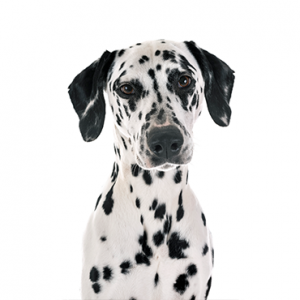 The Dalmatian dog is a breed of medium-sized dogs whose most unique feature is its black or sometimes, liver-colored spots. It’s most popular use in the early days was for carriage. However, over time, the Dalmatian dog has metamorphosed into a pet. Discover more about our Dalmatian puppies for sale below!

The Dalmatian’s history dates as far back as the 1600s in present-day Croatia. It is popularly believed that the dog originated from a town called Dalmatia_ hence its name. The Dalmatian was first illustrated in an altar painting in Croatia at about the time frame of 1600 and 1630.

But it’s oldest known documented description can be traced back to the early 18th century and the archives of a certain bishop named Peter bakic` in the church chronicles from 1719 who described it as “CANIS DALMATICUS”.

The Dalmatian was first introduced in England by a man named Vero Shaw in the year 1882. The Dalmatian was also popular in the continent of Europe from the beginning of 1920, for the coat that’s made from its skin.

Dalmatians are usually known to be high energy dogs. They are very athletic and social and as such, love being around families. Usually, a Dalmatian might be a bit hostile to a stranger but once it gets acquainted with that person, it becomes very friendly.

A Dalmatian is also very sensitive and intelligent. However, a Dalmatian should not be left alone for too long as it can get destructive when it’s neglected or bored. When bored, a Dalmatian can go as far as to chew shoes, furniture, and even electronics. This is because of its high energy levels.

Dalmatians are very good for a family setting because they’re very social. The perfect environment for a Dalmatian would be a house with lots of space and possibly, a well-fenced backyard that would allow the dog to go about its usual activities such as running, jumping and playing around.

An average Dalmatian needs about 1 hour of daily exercise. This is primarily because a Dalmatian is a very active dog, and as such, would love to move around. A Dalmatian doesn’t only need physical exercises; Dalmatians also need as many mental exercises too.

The best exercise option for a Dalmatian would be to take it for a long hike in the woods. However, other options include jogging, playing fetch with it, teaching it new tricks such as playing dead and catching paw, and also jumping.

If the opportunity comes up for your Dalmatian to engage in competitions that involve track events, training for it would also be a great way to exercise your Dalmatian. On the other hand, a Dalmatian wouldn’t mind a casual stroll, so it’s also a great exercise option for your dog.

Dalmatians are typically one of the cleanest breeds of dogs in existence. Their skin produces very little oils and so it’s usually dry, leaving a Dalmatian free from the “dog smell”. Nevertheless, a dalmatian should have its bathe regularly.

However, it’s very important to note that a Dalmatian’s nails are very strong and as such, trimming its nails would require extra care.

The unregulated breeders who are selling outside of the USDA regulations and without a license are what we consider to be “Puppy Mills.” We are committed to offering Dalmatian puppies who will grow up to become important members of your family. We only purchase puppies from the very best sources, and we stand behind every puppy we sell.

Dalmatians are generally unproblematic. Caring for a Dalmatian simply involves regular brushing which aids bonding, lots of exercises and also showering it with attention.

Dalmatians are popularly known for shedding lots of hair. The best way to deal with this is to brush the dog as often as possible.

Spaying a dalmatian is usually a matter of owner’s choice. However, most veterinary doctors do advise that dalmatians be spayed to avoid dealing with diseases that are related to reproductive organs.

A dalmatian should be fed at most 5 cups of dog food daily. Certainly, this varies between dalmatians of different ages.

Dalmatians are very social and active dogs and as such, will fit in very well in families. However, kids must take care of a Dalmatian.

Dalmatians like every other dog have common health problems such as deafness, hyperactivity, hip dysplasia, and urinary stones. However, most dalmatians are usually healthy and may never experience any of the aforementioned health issues.

Dalmatians do not produce so much oil in their skin. Hence, the dryness of its skin and its odorless nature.

Dalmatians are the best option for a family that wants to keep everybody actively doing something. Their playful and energetic nature makes them one of the most sought-after dogs.