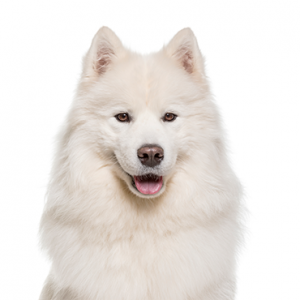 The white lively Samoyed breed besides being known for the role it played in herding amongst the Siberians, is a good domestic animal. Their thick white coat makes them attractive at first sight while their sociable nature keeps them around longer. Discover more about our Samoyed puppies for sale below!

The Samoyeds are a spitz-type dog known to have originated from Siberia. The Nenets—a group of people in the Northern Samoyeds from which the Samoyed breed gets its name—trained the dogs to be used in hunting and herding of reindeer. They are a breed from the lineage of the Nenet laikas which had a wider variety of coat colors.

By the 20th Century, they were on their way to the Antarctic, pulling sleds as they went. A group of them went on expeditions with Fridtjof Nansen and Ernest Shackleton (on different expeditions) and only the strongest of the group survived.

A number of standards have been published for the Samoyed breed but the first was released in 1909 after the breed had made its way to England.

Samoyeds are as playful as they look. They are smart, obedient and their curious nature could lead them into mischievous deeds but other than that, they are friendly pets. This does not take away the need for training and supervision as they can be a handful when left alone.

When a Samoyed comes across a stranger, it may bark to let the owner know that someone new is around the block but their playful nature usually gets in the way and it quickly welcomes the person by wagging its tail. They enjoy the company of people, animals and anything that can be “herded” because of the nomadic traits they possess.

Although Samoyeds do not pose a lot of problems, they should not be kept in confined areas. They love to play and run around and as such, require adequate space to carry out their daily activities. A well-fenced yard devoid of harmful elements would make a good home for Samoyeds. This space should be close enough to the residence to aid supervision and if allowed to wander into the home, the dog should be monitored to prevent it from turning appliances into toys.

Being lovers of fun, the Samoyed breed requires a reasonable level of exercise on a daily or weekly basis. In addition to this, the Samoyeds are prone to becoming overweight since they eat a lot and regular exercises would help keep them in check.

Being good herders, they love to pull things around including the one holding the leash so it is important to train the dog to listen to simple commands which would be useful in times when they cannot get a grip of themselves.

As a result of the highly-dense coat they possess, the Samoyeds require a high level of maintenance. Besides the expected period when they blow their coat, strands of fur get detached regularly as they run around.

Also, their sleek white coat may get stained in the process and as such, would require regular baths. All of these factors make the dog time and energy demanding which every prospective owner should gear up for.

They rate low when it comes to drooling but this is almost unavoidable when they wag their tails to welcome you home. As mentioned earlier, they have large appetites but this can be regulated with consistent training.

The unregulated breeders who are selling outside of the USDA regulations and without a license are what we consider to be “Puppy Mills.” We are committed to offering Samoyed puppies who will grow up to become important members of your family. We only purchase puppies from the very best sources, and we stand behind every puppy we sell.

Yes, they do. Their friendly and sociable nature makes them suitable to be bred at home.

Yes. The thick coat they possess shields their bodies from extreme cold or heat.

Yes. All Samoyed breeds have a white coat. It is one of their qualities.

The cost of any puppy varies. Contact us today to learn more about the availability and cost of this puppy.

As you already know, their coat acts as a shield against harsh weather conditions so shaving it off would be a bad idea.

Samoyeds can rescue themselves from drowning if they happen to be in such a situation but getting in the water is not something they would readily do.

Samoyeds chase cats for fun but to prevent the fun from going wild, it is important to train them and keep an eye on them while they run around.

Samoyeds are not headstrong which makes them a rather easy breed to train.

Based on frequency, the Samoyeds do not shed a lot as this process only happens once or twice a year but when they do shed, it is really heavy owing to the double coat they have.