Want more information on this Lhasa Apso? Please fill out our Pet Inquiry form below. 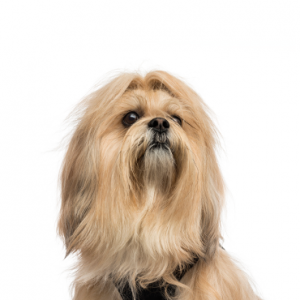 One of the oldest dog breeds of all time, the wool-like Lhasa Apso is a graceful Tibetan dog breed that is globally famous for its long hair and warm companionship. Discover more about our Lhasa Apso puppies for sale below!

Lhasa Apsos were discovered in Himalaya, Tibet around 800BC. They were bred as domestic alarms in Tibetan royal households and Buddhist monasteries in and around the consecrated Lhasa city environs.

Tibetans believed the Lhasa Apsos brought good luck and could also provisionally carry the souls of their deceased owners; hence, they held the breed in high regard and never sold them. They could only be obtained as gifts and were always gifted in twos.

The first pair of American Lhasa Apsos was a gift from the 13th Dalai Lama to the world-renowned traveler, Mr. Suydam Cutting in 1933. However, the breed has earlier made it out of the Indian subcontinent by soldiers who carried some of them to England where they were called Lhasa Terriers. Their sleek coats come in many shades of brown, white or gold.

Lhasa Apsos were bred by Tibetan monks to be calm, keen and assertive listeners. They are highly dominant, smart, and attentive dogs.

They have an ego that makes them want to lead other dogs, even the ones larger than them. Generally, they fare well around other dogs and pets with early socialization and training. They are better around older and peaceful children.

Their independent nature allows them to stay put, even when left unsupervised for some time. They have the instinct to protect, and they make excellent watchdogs. Their interestingly diverse personality also makes them full of fun and joyful. They love close contact with the people they love.

Due to their Himalayan origin, Lhasa Apsos have evolved to survive in varying climates ranging from brief summers to intensely cold winter times. They are great for people with small household spaces.

However, they need lots of ventilation, especially in the summertime. They also adore outdoor games in an enclosed backyard.

The Lhasa Apso is considered by many to be a lap dog, but to maintain an optimal state of mental and bodily health, they require daily activities that could be in the form of leisure time or lengthy walks. They are satisfied with indoor living and do not require vigorous exercise.

They are a bit challenging to train because of their slow mental maturity rate, so they need a stern, patient, and consistent trainer. Lhasa Apsos do not regard their size. They engage in activities that larger dogs would typically do, such as mountaineering and trekking.

The fur of the Lhasa Apso can be likened to human hair. They do not shed as most dogs do. Their shedding process is slow to prevent hair knotting and matting. Their heavy coats sometimes produce airborne flakes of dead skin that could cause allergic reactions.

The Lhasa Apso has two coats – an undercoat for warmth and an overcoat for safety and sleekness. Grooming includes consistent hair brushing to get rid of dead hairs, prim dental care, and bathing to remove dirt and keep the coat glossy.

Nail trimming should be done by a professional once a month. Check for sores, inflammations, and redness on the skin, in and behind the ears, and in the mouth weekly. Overall, grooming a Lhasa Apso requires expert hands, and you might need to pay a skilled groomer once in a while.

The unregulated breeders who are selling outside of the USDA regulations and without a license are what we consider to be “Puppy Mills.” We are committed to offering Lhasa Apso puppies who will grow up to become important members of your family. We only purchase puppies from the very best sources, and we stand behind every puppy we sell.